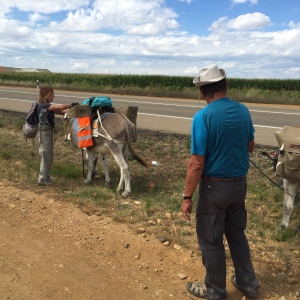 I am in a little auberge for the night. way out in the country, I sit down to dinner with eight other pilgrims also on the road to Santiago, two are French, two from Venezuela, one of whom has had far too much plastic surgery for her own good, four Spaniards, none of them speak English, this I realise is going to be a difficult dinner.

My rather dismal french, learnt badly at school seems miraculously to get me by, at least this is what I decide after several glasses of red wine. I strike up a conversation with the French man sitting next to me, he is a big fellow, in his sixties I guess, he has hands like shovels, he speaks with a gruff bellowing voice,  he has walked from Cannes with his wife, and he goes on to tell me two pineapples. I can’t quite work out why, but he talks about his pineapples as if they are his best friends. Then he shows me a picture, my french is worse than even I thought when I realise he means donkeys, not pineapples. It’s an easy enough mistake to make, if you just scraped an O level in French in 1979. Ane is donkey, Ananas is pineapple, French was never my forte, we move on. The Frenchman goes on to show me a map of his route, across France and into Spain, he is excited to show me how far he has come, I can’t help thinking that his Camino is a little nuts, walking almost two thousand kilometres, taking a couple of Donkeys all the way. Why on earth would anyone want to do that?

He gets up from the dinner table and heads for the toilet, whilst he’s away I ask his wife if she is enjoying the trip and she says yes, sometimes, but there is a sadness in her voice and manner, it was her husbands idea she tells me, all his idea, he’s talked about it for years she says. Then I think I get it, the chap is a bit of a bully, it’s his idea to do the trip, he’s pushed his wife into it. I decide he’s an unpleasant man.

The husband returns, we chat and I ask him why he is walking to Santiago, with of all things a couple of donkeys, he tells me that he and his son used to talk about doing the Camino together, that they said they would take donkeys with them to carry their equipment,  but that they never managed to make it happen, last year his son passed away. This year he is walking the Camino, with donkeys.

This stops me in my tracks, any thought I had of his trip being nuts disappears in a flash. My ideas of him as a bully melt away, he was honouring his son, it made perfect sense, this was his promise, his way of showing his love, bless the man. 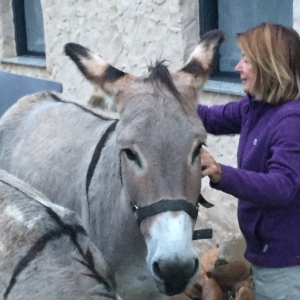