It’s Chotti Holi, the day before the main Hindu Festival of Colour, In the morning I leave the quiet oasis that I am staying in, an old Haveli with a central courtyard, full of vines & flowers & calm, shaded from the sun and the heat, I step through the enormous wooden front doors, that keep the world at bay and into the streets of Udaipur to get my breakfast. Almost immediately the heat hits me, but I have the feeling that there’s something else in the air, something is different, there’s a buzz about the place, more motion, more energy,it’s like a kind of palpable electricity in the air, I walk no more than a hundred yards and I see an old chap struggling with a large sapling, maybe thirty feet or so high, he is standing it upright in the roadway, a group of youngsters are carrying smaller branches and twigs, dried grass and kindling. I stand and watch as they make a bonfire, in the middle of the road.

They decorate the tree with strung flowers, as I walk on around the next corner another hundred or so metres away exactly the same exercise is taking place, another sapling, another bonfire, a different group of bonfire builders. the area around the base of the bonfire is decorated with powdered colour, a little like a buddhist mandala, as I walk towards the centre of the town and Jagdish Chowk, a main temple complex I see bonfire after bonfire being built in the residential streets, dozens and dozens of them. I reach the main square, it’s full of people selling kindling, dried wood & grass. Six of the most enormous speakers are stacked in the square, lighting is being rigged, a stage built, its a picture of frenetic activity.
This is going to be big, and loud, very loud.

After sunset – By evening the streets are awash with people, at Jagdish the long line of steps up to the temple have now become seats for hundreds of people packed like sardines, the street likewise, maybe a few thousand people are here, a stage is home to a dancing girl, she sways her hips to delight of the audience, shaking her stuff, the giant speakers blast out music and the crowd becomes more and more excited. As the stage is cleared away a hundred metre stack of firecrackers lining the street kicks in, the crowd surges back away from the explosions,clouds of smoke rise into the air and the noise becomes deafening, the bonfire at the centre of it all bursts into life and flames climb thirty or forty feet into the air.

A while later I head back home,retracing my route, the bonfires that were being made when I came out are now glowing embers, the air is heavy with smoke and the smell of gunpowder, this is just the beginning, tomorrow it really gets messy, out comes the colour,the bhang, (marijuana by another name), and then the craziness really begins.

This festival is about celebration, it links all ages, and in a way its a link to the past, perhaps a past of myth, but & in turn its also a  link to all the generations before that celebrated Holi, and to those that will in the future, a kind of timeless experience, it’s a chance to let go and just to be, tomorrow is another day. 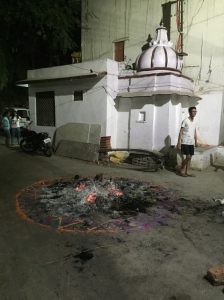 There are a couple of different explanations for the origin of this festival, the most accepted is that in some archaic time there was a rather unpleasant King, by the name of Hiranyakashyap, now this fellow was a nasty piece of work, he is sometimes described as a Demon King, but at the least he was a real Ego-maniac, so much so that he insisted that all his subjects recognised him as a God, unfortunately his young son Prahlad thought this was a pile of proverbial bollocks and refused. His old man didn’t take kindly to this and gave his son a really hard time, but whatever the father did the son refused to recognise his father as a God. The King had an equally unpleasant sister, Holika, now she was a bit of a witch, with her brothers approval she decided to teach Prahlad a lesson, she coaxed the young boy onto a pile of dry wood, sat him on her lap and then ignited the wood and up it went up in flames, Holika being a witch had a cloak which protected her from the flames. The boy was for it, but the Gods sent a gust of wind and the cloak blew off Holika and wrapped itself around Prahlad, the witches plan failed & up she went in flames, the little boy was saved. The Gods eventually couldn’t ignore Hiranyakashyap and he was also destroyed. The festival then and the bonfire is to celebrate the triumph of good over evil, it is always held on the full moon in March, it also heralds the end of winter and the arrival of summer. The story goes that the ashes from the bonfires were put on the foreheads and bodies of those who attended the celebrations, for good luck and to ward off evil. Different woods used in the bonfires had different shades of colours, and over time this grew into the use of powdered colours from plants & trees.

There is a chant from the Rig Veda to be repeated during the burning of the bonfire, to ward of evil spirits.
Now although I am not a superstitious bloke, I see no harm in covering all the bases, so here is a copy in the original Hindi together with a translation, you never know it might be useful.

For the removal of obstacles & miseries, for the fulfilment of worldly desires & to ward off evil

O! Adorable Lord, put forth your vigour, as a hunter speeds his capacious snare, and go like a mighty king on his elephant with his attendants. You are the scatterer of dark forces. May you swiftly follow and transfix the miscreants with your dart that burns more fiercely. (1)
O! Divine fire, your swift and whirling flames move quickly. Glowing in your fury, may consume (the foe). O! Fire divine, (when oblations are) offered by ladle, may you cast scorching flames, sparks and fire brands all around you. (2)
O! Fire divine, may you with your most rapid motion direct your radiant flames all around and un-resisted become the protector of your people. Let no malevolent miscreant, whether far away or close by, prevail against us, your worshippers. (3)
Rise up, O! Sharp weaponed divine fire! Spread wide your flames. Entirely consume the miscreants, unfriendly to us. O! Blazing fire-divine! Burn down that one like a piece of dry wood, who acts as an enemy towards us. (4)
Rise up, O! Divine fire! Chastise those who overpower us. Manifest your divine energies. Slacken the strong bowstrings of the malignant foes. Destroy those who are hostile, whether friend or alien. (5)

One thought on “Chotti Holi”