I head out from the little town of Astorga, chocolate town is how I will remember it, so many chocolate makers, so many shops with windows crammed with the stuff, it’s early morning and stalls are being set up for market day, van loads of fruit and vegetables are being decanted onto table tops which begin to heave with the weight and variety. In a few minutes I am again in the country, the sky is overcast and rain is forecast, the wind is chilly, I stop at a little chapel, through  the wide open front door I can see an old Spanish lady, she is waiting for passing pilgrims, hopefully, early morning is pilgrim rush hour, but they seem to be passing her by, I decide to visit her chapel, she holds up two pilgrim stamps, asking which I want for my pilgrim passport, one is of the Virgin Mary, the other of Christ, I ask her to decide which I should have, she stamps my passport with the Virgin Mary. I put a coin in the offering basket and light a candle by the altar, for whom or for what I’m not sure, maybe just to mark the day. I thank her and begin to head for the door, she stops me and stamps my passport once again, this time with her J.C. Stamp, I smile and thank her and head on my way.

A few kilometres further on along the track I see flashing blue lights, then  a cameraman and a reporter, microphone in hand, a policeman points at me to get out of the way as a large blue police 4 wheeler speeds past me. Then I realise where I am, the day before I saw a news story about a missing Amercian on the Camino. A man had been arrested and a body discovered, this was where it happened, an Arizona woman had ended her Camino here, robbed, murdered and dismembered. 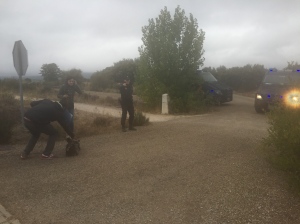 I had read about the missing woman, in the previous days as missing,she was in her forties and like me had decided to take a year to travel and see the world, this was where her journey had ended. The Camino is a place full of explorers and searchers, in it I have only found the most pleasant of people, and I would say of it that almost without exception people on the road are helpful, generous and kind, Denise, from Arizona was unlucky enough to be  in the wrong place at the wrong time and meet the worst of men. As I continue beyond the crime scene the weather closes in, fog and mist descend and what was quite a wide track narrows to a narrow path, it feels squeezed by the forests on either side, trees covered in blankets of moss, it begins to rise steeply, stones and boulders and mud make it uncyclable and I push my way uphill unable to see more than a few metres ahead, then the rain begins to fall, heavy and cold.  For what feels like an age I continue on this path,  I begin to feel a chill creeping into my bones, my waterproofs are ineffective and I am soon soaked to the skin. I see nobody on the path for an hour or more and whilst in myself I feel fine I realise that for others sometimes it brings great darkness.

Then the path begins to level out and widen, I come to the Cruz del Ferro, at five thousand feet, though with the fog unless I had read about the place before I  wouldn’t have been the wiser. The Cruz de Ferro is a five metre wooden pole once topped with an iron cross, the original is now displayed in a museum, around the pole lies a hill of stones, placed one by one over centuries by the hundreds of  thousands who have passed by, there are countless names and wishes and prayers carved or written into the stones.

I shelter from the rain and share a dry spot with a Spanish man in a sleeping bag and his dog. We talk and he tells me he is staying here til he rain stops, he will remain for the night. He looks tired and a little bit like a hobo, I think he has been living rough for quite a while, the best kept thing about him is his dog, who he cares for and feeds better than himself. We talk for a while and he eyes my tobacco, can you spare some? It’s twenty kilometres to the town and  a Tabac he explains. I share mine with him and in return he takes my photo at the Cruz del Ferro.

As there is no chance of the rain coming to an end I decide to push on through, I place a stone on the mound. Legend says that if a pilgrim dies on the Camino then they are carried straight to paradise, if there is a justice in the world or in existence I would like to think that Denise, the American lady left her Camino and found her Paradise. 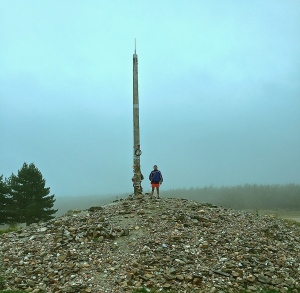