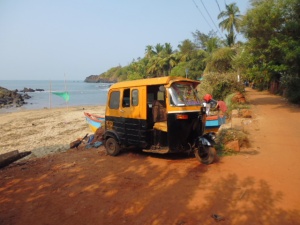 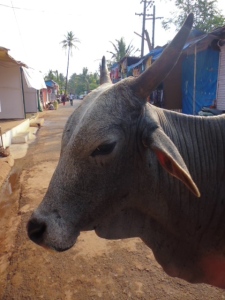 My day begins with a swim in the Sea at 7.30, the third day doing so, its a fab way to start. I have a coffee, then hop on my rusty but trusty Scooter. He’s a little battered, but still going, we go together fine. I wander back roads and have a habit of getting lost, but I rather like it, in the end I make it back to the beach and my shack and go back to the lounger.

Later supine and snoozing I wake to the sound of a Mans voice, a young Indian guy is delivering his best sales patter extolling the virtues of his armful of DVD’s. The tourist is distinctly non-plussed, until that is he says out of the blue that she has a big bum and big tits and this he thinks this is a very good thing. I’ve not heard this approach in product sales before and I wonder how she will react, the tourist perks up, laughs and becons the hawker. Have you anything sexy you can show me, I need sex she tells him, I think of a cat playing with a toy mouse, she is playing with him and enjoying the process. DVD’s are pawed one by one, each discarded with disinterest, one after another, ten minutes later the hawker leaves sale-less and a with his head a little downcast. I ask the woman if there was nothing that took her fancy, she replied that she didn’t want to buy anything, but she liked being told he liked her big ass & tits.

We talk, Georgie is a Londoner, Crouch End, she works in Shoreditch as a Graphic Designer, she hates it. This is her second time in Goa in six months and she is trying to work out how to spend more time here and less in London. She tells me that her dream is to open a business that specialises in body treatments, her area of expertise is colonic irrigation. I am a little taken aback, dreaming of a calling working with colons strikes me as distinctly out there. I wonder what the noun is, a Colonist? I am not sure of that or indeed why somebody would dream of a career with colons, but then what do I know, she has her dream, good on her.

Goa is a melting pot, people from all over, all for different reasons, all looking for a slice of something, here for change, for a break, to make money or spend it, or just to get wasted on a regular basis. It’s a microcosm of life, all shades and hues under a common sun, busy doing something or nothing.

I am here because the sun shines, because it is not home and because I want something different, exactly what I can’t say, but this is as good a place as any to start. I’ve certainly craved the sun and that is here in plenty.
Goa is India Lite, enough to give you a sense of the familiar, enough equally to give the sense of being in a very different world that at times seems absurd and unfathomable, the chalk and cheese, the combination is one I like a lot.

By late afternoon its time to head off to the massage I’ve booked, as I stand outside the treatment room I am greeted by Sunny the fellow from Kerala that is going to spend the next hour pulling, neading and stretching me. He greets me, we shake hands, my pink one, his black, the contrast makes me feel like a rather tall, slightly podgy, lobster-like Englishman, one of those all too frequent types that spend too much time in the sun and not enough time applying sunscreen.
Sunny does his best for an hour, working on the lobster, at the end of the session I stand up from the massage table and check myself, my limbs move a little more easily, this is good, I think it would be a good to do lots more of this. I turn to Sunny, I feel much better I tell him, then I notice that he looks worn out and knackered. My hour and feeling better has had the opposite effect on him. When should I come again I ask him. He turns to me and says with a slightly mournful tone that I need a lot of work, he points to each of my joints in turn, here, here, here, he continues to point at the key joints in my body, he summarises so I am crystal clear, you need a lot of work, all over. Maybe it is good to rest and to come back in a few days. I book another session ( not too soon ) to aid in who’s recovery is a point of speculation.

By evening I am peckish, I wander down the beach and turf up at a restaurant, I go for a veg Indian concotion with Roti. After my meal I sit back in my chair and reflect,my stomach is full, I am not hungry, but something is missing, I still want something else, then I think of sugar, sweetness, sugar, honey. That’s what I need. I peruse the menu and go for Dessert. When it comes I scoff it down greedily. Then the idea comes that I’ve done this forever, I crave sweetness, often, I need to be looking outside of the Dessert menu.